There is of course variability in this pattern. If you have disturbed or under sleep, our bodies attempt to compensate by putting us into REM sleep earlier, primarily by shortening our SWS. The problem is this shortened cycle translates in less growth hormone production, which leads to problems.

To ensure you are achieving quality sleep experts recommend sleeping on a custom built/prescribed mattress tailored to your individual body type.

PrescriBed offers custom made mattresses based on a diagnostic and assessment process which determines the right mattress for your body type. Offered by appointment at our St Kilda Road Clinic an hour spent with us before spending 17,500 hours in a new bed could be the best investment you make for your health.

Improves Recovery from Surgery or Injury 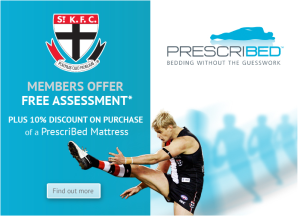 My new bed and pillows have allowed me to sleep without any pain for the first time in years. The staff really knew what they were talking about in regards to mattresses and also the affects on the body. Quality sleep is way too important to live a life without it.
Leon Akritidis

I love my Bed!

I particularly liked that assessment method and the fact that there are many options so the odds of getting one that’s right are pretty high. I truly believe the beds are very reasonably priced and the turn around time from order to delivery was really fast. I’ve had my bed for a couple of months now and I am still amazed at how incredibly comfortable it is. I can definitely feel the difference in my back and posture! I LOVE MY BED!!!!!
Eleanor Bilston